Union Pacific is a freight railroad system that spans 23 states. The company is headquartered in Omaha, Nebraska and has significant operations in Texas, with over 7,000 of their approximately 42,000 U.S. employees based in The Lone Star State. With 6,298 Texas track miles, Union Pacific trains crisscross Texas, serving customers along miles of track, driving economic development. From the oil fields in West Texas, to the refineries in the southeast, wind farms in the panhandle, border crossings in the south, and retail warehousing locations statewide, Union Pacific delivers the raw materials and finished goods keeping Texas growing. Union Pacific invests significantly in Texas. In 2018 alone, they accounted for $2.2 billion in-state purchases and $1.6 billion to Texas community giving. Across their operations, Union Pacific strives to uphold conservation as a business priority, continuously finding ways to pioneer innovative sustainability practices. 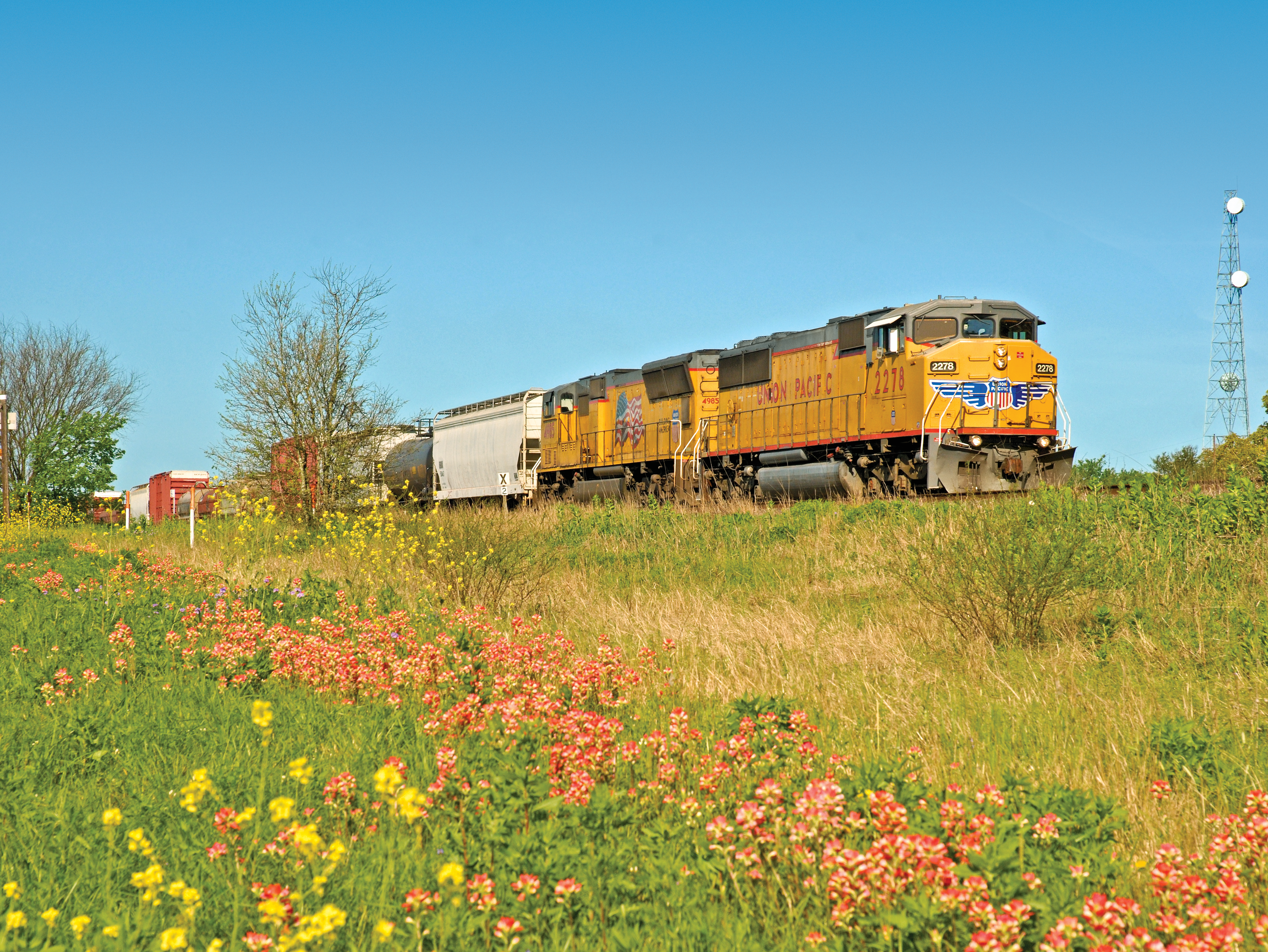 As one of the nation’s largest freight railroads, Union Pacific believes it is their responsibility to act as environmental stewards, working to reduce fuel consumption and greenhouse gas (GHG) emissions. Railroads move approximately 1/3 of all U.S. exports and intercity freight volume in the United States. Despite the large volume, EPA data shows freight railroads only account for 0.5% of total U.S. GHG emissions and just 2% of emissions from transportation-related sources.

In 2018, Union Pacific moved 1 ton of freight 444 miles on a single gallon of diesel fuel. They are committed to investing in technology that helps them further identify fuel saving opportunities and increase locomotive productivity. One example of their commitment to innovative and sustainable technology is a new software that helps them predict potential locomotive failures. It runs while a train is traveling their network, rather than requiring the locomotive to operate in a static position inside their yard, burning fuel.

Union Pacific ensures conservation occurs at every level of their business. Every Union Pacific employee must commit to preventing pollution, continuously improving and complying with all regulations, according to the company’s environmental policy signed by the Chairman, President, and CEO. 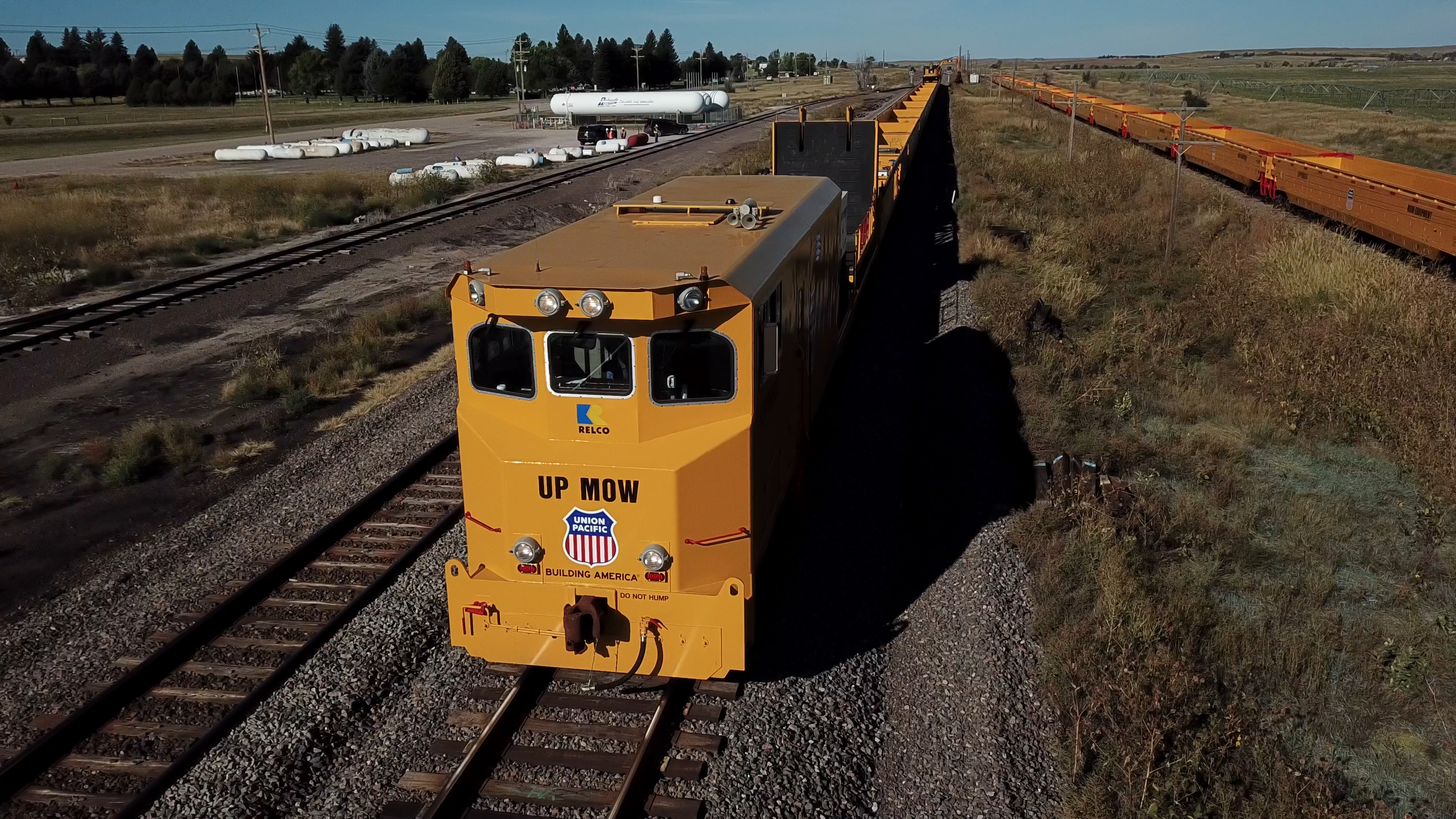 Diesel fuel accounts for 17% of Union Pacific’s operating costs, and the company is always trying to find ways to improve fuel efficiency. They use a software system in their high horsepower locomotives to predict locomotive failures and reduce fuel consumption. Trip Optimizer and LEADER are energy management systems for locomotives that reduce fuel usage, minimize GHG emissions, and optimize train handling. Since 2008, Union Pacific has invested $3.8 billion to purchase more than 1,500 new locomotives that all meet the EPA’s tier standards. Union Pacific retired more than 1,950 older, less fuel-efficient locomotives over the same period. Some of the highlights from Union Pacific’s fuel and energy efficiency include:

Union Pacific is committed to be a responsible steward of their land. They work to preserve ecosystems, improve resiliency, and reduce impacts. To achieve this, they implement habitat conservation plans to protect ecosystems and endangered species in various locations. Plans in the western half of the network impact several species, including the desert tortoise, endangered southwestern willow flycatcher, and valley elderberry longhorn beetle. The Nature Conservancy and a coalition of public and private partners, including Union Pacific through its Community Ties Giving Program, are working to conserve and restore the longleaf pine habitat. 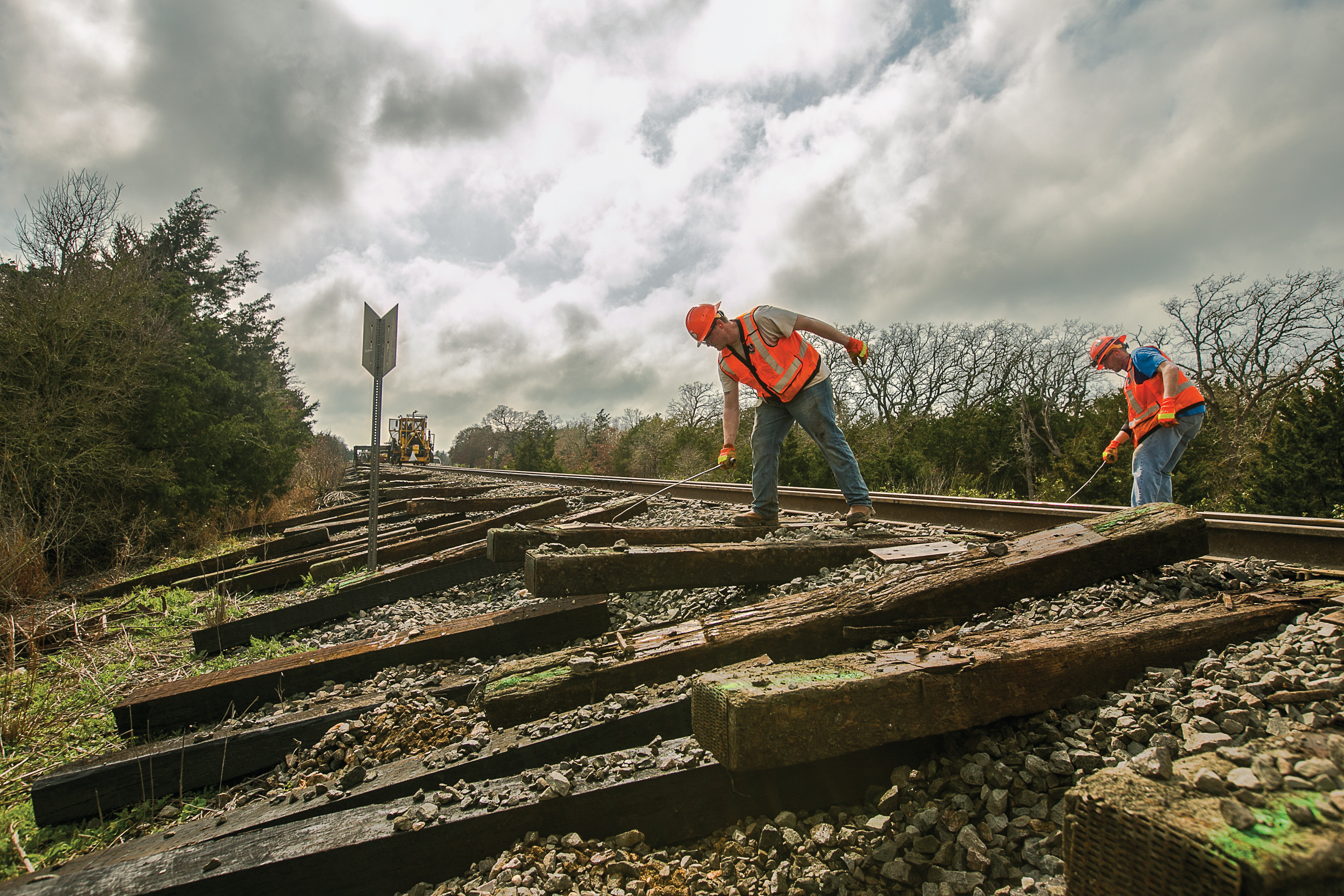 Union Pacific is actively works to reduce the amount of waste destined for landfills. Last year, they diverted approximately 71% of waste from landfills. Annually, they recycle about 300,000 tons of scrap metal, the most energy efficient recyclable material. Scrap metal is the second largest contributor to their success diverting recyclable materials from landfills behind rail ties. They also recycled 274,000 pounds of electronic equipment and more than 1.1 million pounds of signal batteries were recycled or distributed. They also recycled more than 5.2 million gallons of oil and fuel.

In September 2019, Union Pacific took another step toward efficiency, further demonstrating their commitment to the environment. Union Pacific received its first Maintenance of Way Tie Pickup Train, equipped with two excavators that grab bundles of used rail ties and load them onto rail cars. The train follows a tie gang as it replaces old ties with new, and then departs directly to one of three facilities where the ties are recycled or shredded for cogeneration fuel. Typically, a contractor uses a truck to pick up the bundled ties and drive them to a train for departure. They anticipate the new train will pick up 5,000-6,000 ties daily, compared to about 2,500 per day by the contractor. This work quickly removes construction debris from their communities, while reducing emissions from truck activity.

Looking into the future of conservation, and how their organization will help conservation progress, Union Pacific believes a healthy environment is an essential foundation for a strong country and a vibrant economy. Their vision of “Building America” involves protecting and strengthening this foundation.

They strive to appropriately balance financial returns, environmental performance, and social commitment. Fuel efficiency is a critical part of Union Pacific’s sustainability approach, and they have employees dedicated to finding ways to reduce consumption. Innovation plays a fundamental role in their fuel efficiency performance, supporting the train crews who are responsible for the daily movement of goods that Americans rely on.

One way they plan to optimize fuel consumption is equipping most of their high-horsepower locomotive fleet with an energy management system, similar to cruise control. Locomotives will be able to use this technology in all locations utilizing Positive Train Control (PTC). PTC provides the two-way communication and data needed to optimize the technology. 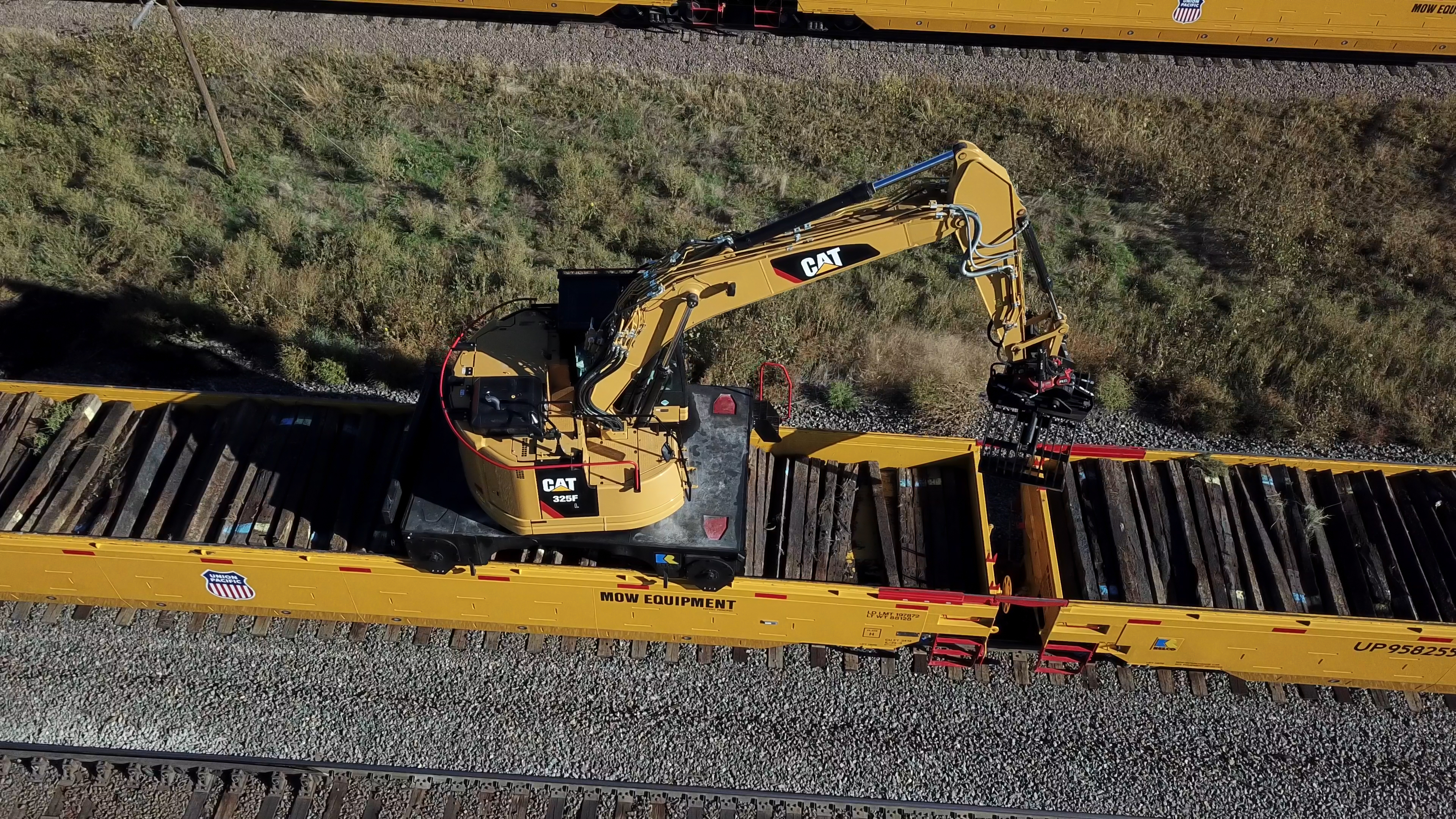 Texas is an important base for a significant portion of Union Pacific’s operations, making an old adage their own: “It is said everything is bigger in Texas, and so is Union Pacific”. They have more than 6,200 miles of track crisscrossing the Lone Star State and 7,000+ Texan employees. Union Pacific serves a wide variety of customers that drive economic development and play a vital role in cross-border trade. They are the only railroad that serves all four major Texas gateways with approximately 11% of volume originating or terminating in Mexico.

Texas’ population and economy are booming, which is leading to more freight movement into and out of the state. The Texas Department of Transportation estimates freight volumes will grow from 2.2 billion tons to 4 billion tons by 2045, meaning more interstate congestion. Union Pacific is ready to handle increased volume, moving freight in an environmentally responsible manner. Over the last decade, they have invested more than $5 billion into hardening existing infrastructure and completing projects designed to keep Texas industries thriving. 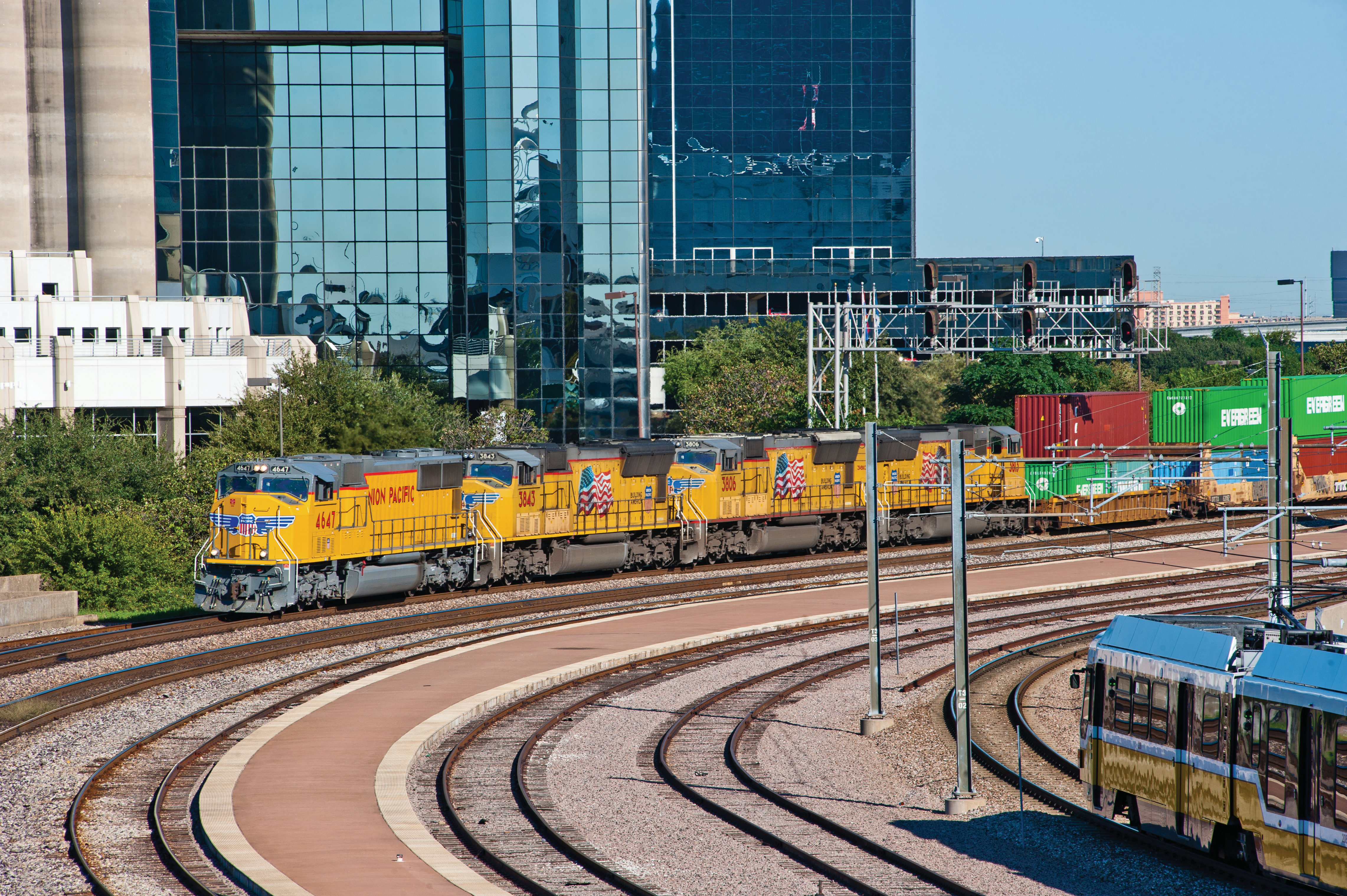 1 Kilowatt-hours is the measure of electrical energy equivalent to a power consumption of 1,000 watts for 1 hour.