Sanderson Farms, Inc., founded in 1947, is engaged in the production, processing, marketing, and distribution of fresh and frozen chicken and other prepared food items. With more than 18,000 employees in operations spanning five states and 17 different cities, Sanderson Farms is the third-largest poultry producer in the United States. As a company, Sanderson Farms is committed to adopting a fresh approach in everything they do, not only where products are concerned, but company-wide, as well. Though the company has grown in size, it still adheres to the same hometown values of honesty, integrity, and innovation that were established when the Sanderson family founded the company back in 1947. In Texas, Sanderson Farms employs over 6,500 people at processing plants, hatcheries, and feed mills in Bryan, Easterly, Lindale, Mineola, Palestine, Tyler, Waco, and Oakwood, Texas.

At Sanderson Farms, company success is directly tied to the success of many individuals, the state of their communities, the future of the environment, the health and well-being of the animals they raise, and the satisfaction of their customers. Sanderson Farms must ensure that their company not only survives for the long-term but also thrives well into the future. As a company, Sanderson Farms believes that continuing to prioritize sustainable business practices in their operations is critical to their success over the next 73 years and beyond. As a founding member of the US-Roundtable for Sustainable Poultry & Eggs and the International Poultry Welfare Alliance, Sanderson Farms is committed to furthering animal welfare and industry sustainability not only for the nation but for the world. 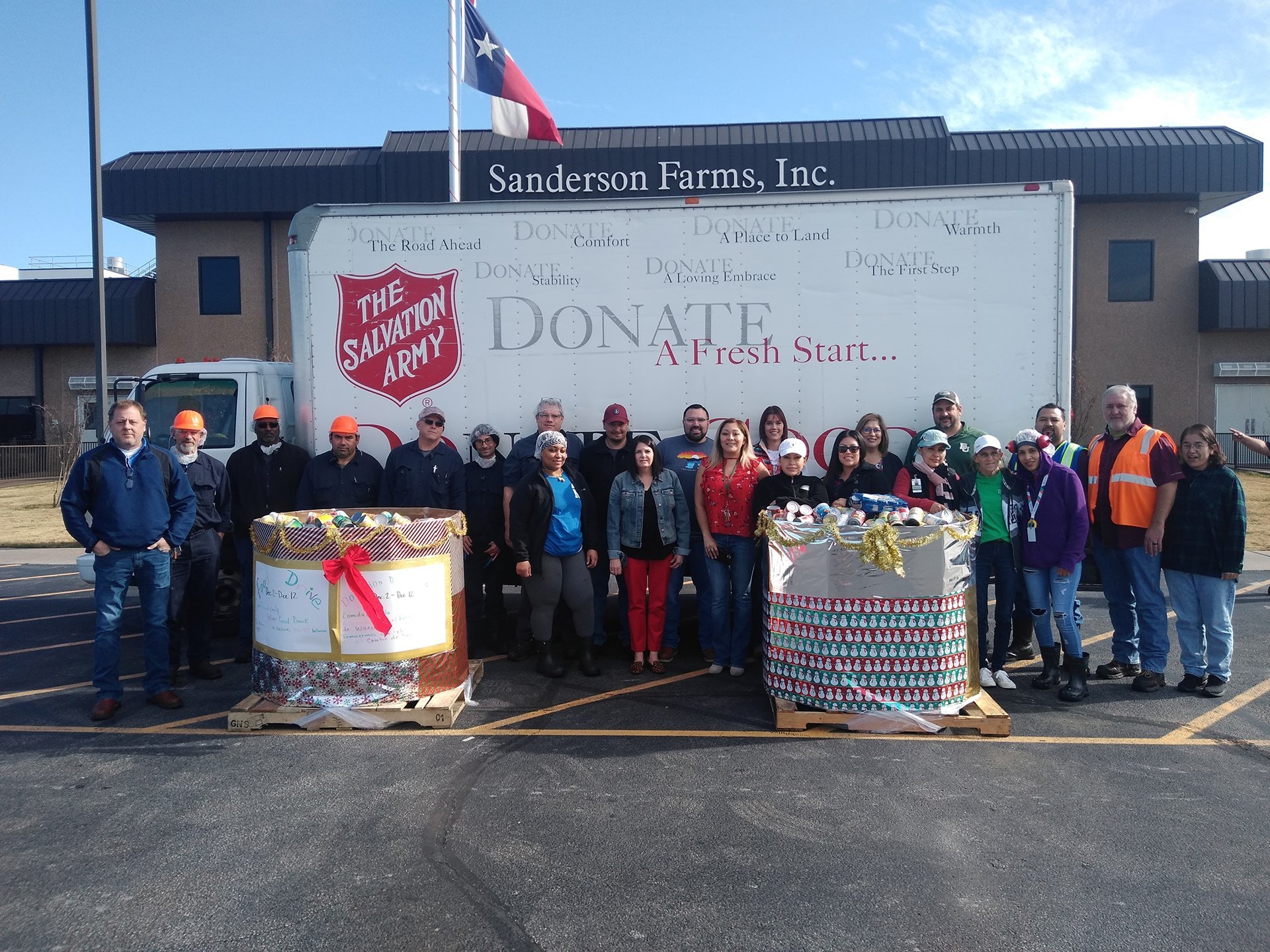 In August 2020, Sanderson Farms was named one of America’s Best Employers in the state of Texas by Forbes magazine. The 2020 America’s Best-in-State Employers list ranks top employers across 25 different industries and is based on the recommendations of employees.

Sanderson Farms utilizes a portion of their wastewater treatment process to generate renewable energy by capturing and refining biogas at their facilities in Waco and Palestine, Texas with plans to generate renewable energy at their Tyler facility in 2021. Through methane fermentation in an anaerobic lagoon, biogas is captured by the lagoon cover and piped to a PSA System, where it is refined to pipeline quality natural gas and sent back to the processing facility for use as a renewable energy source. The pipeline-quality natural gas exiting from the PSA system can be seamlessly used in place of purchased natural gas throughout their processing plants without any equipment modifications.

In 2019, Sanderson Farms generated 206,967 MMBTUs MCFs of biogas, significantly reducing the company’s dependency on purchased natural gas. By using these innovative processes, Sanderson Farms strives to fulfill its responsibility to operate their facilities in a way that reduces their impact on the environment. In 2019 alone, the company generated over 87,500 MMBTUs of renewable energy or biogas in the state of Texas.

In Fiscal Year 2018, the company saved 226,466 kWh of electricity, in addition to reducing their electricity usage by 24% and reduced natural gas usage by 43% at their production and processing facilities since 2008.

At all of Sanderson Farms’ processing facilities, water reuse systems are in place to conserve the use of water. The company takes this responsibility seriously by treating and reusing the water that has been used to clean and chill poultry products and sanitize their processing plants at innovative wastewater treatment facilities housed on-site at their poultry complexes.  Biological treatment, oxygenation, clarification and ultraviolet disinfection to treat wastewater are used before either discharging it directly into streams or applying it to land. To ensure they are doing their part to leave the environment in the areas in which they operate better than they found it, each of Sanderson Farms’ wastewater facility is managed by a specially trained environmental supervisor who is licensed in wastewater and drinking water supply operation. Their wastewater treatment chemical data is reported to the Environmental Protection Agency (EPA), as required by the Toxics Release Inventory program, and their procedures are regulated by EPA programs like the Clean Water Act and the National Pollutant Discharge Elimination System. The company reports the amount of nitrate compounds, along with other chemicals, included in their wastewater for the TRI program. All water released from their wastewater treatment facilities meets the EPA’s Effluent Guidelines Program. 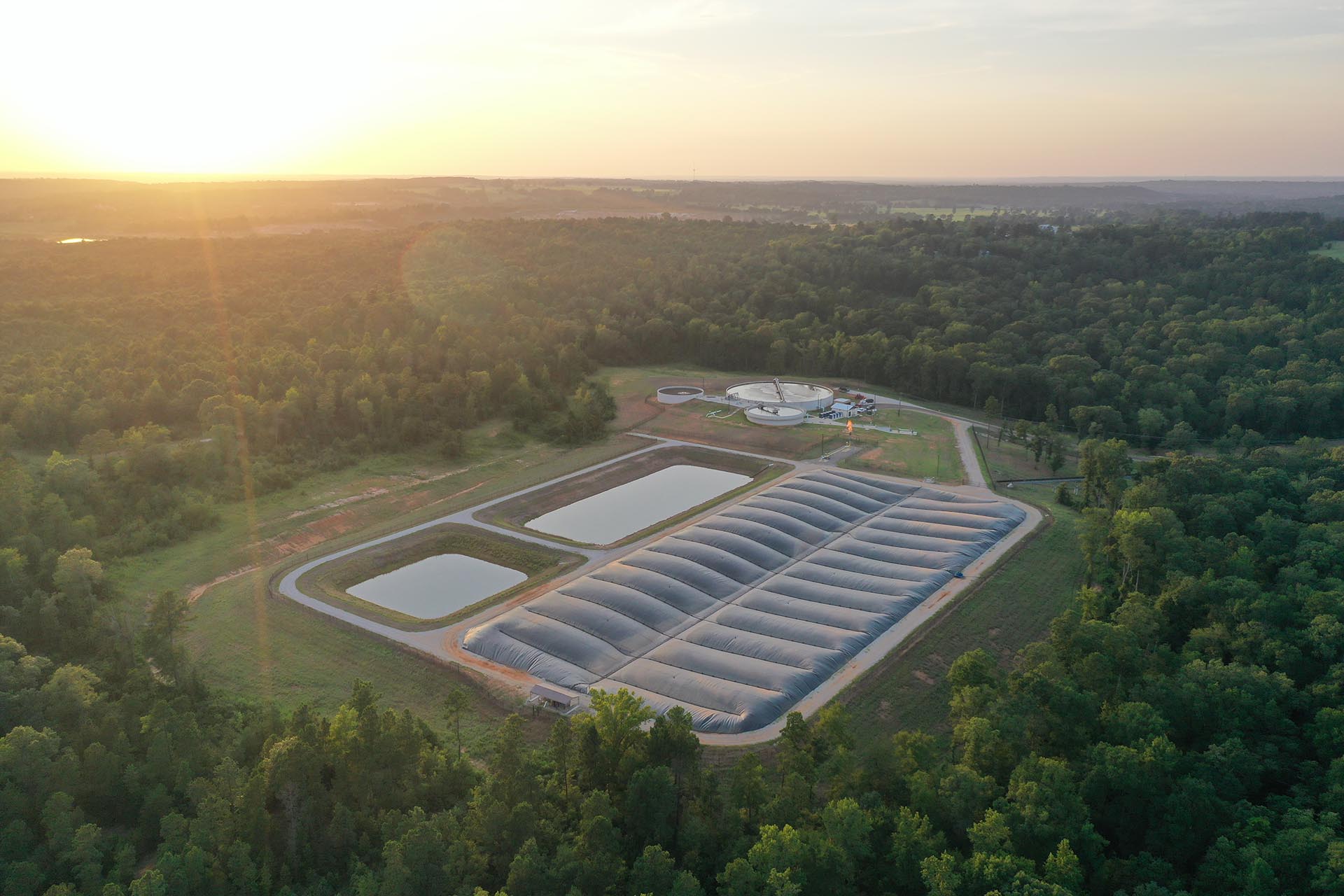 Sanderson Farms goes to great lengths to ensure that their processing facilities are designed and built to conserve as much water as possible. For example, visual inspections are conducted at their processing facilities both during operation and downtime to ensure that water is not wasted. In addition, daily meter readings are recorded and evaluated based on the company’s operating standards to ensure employees are being good stewards of the water entrusted to the company’s care. Environmental supervisors at each processing facility are responsible for monitoring water entering and leaving their facility. Armed with historical data detailing water trends in the average 24-hour period, environmental supervisors are responsible for contacting the processing facility in the event that water usage increases. If water usage increases significantly, audits are performed to ensure that all unnecessary water usage is eliminated. To ensure that every Sanderson Farms facility follows the company’s standards for water conservation, each plant submits a daily utility log to the corporate office in an effort to compare utility usage across the company and evaluate areas that need improvement. Realistic goals are set for each size and type of processing plant throughout the five states and 17 different cities in which they operate.

Additionally, all high-strength areas of stormwater around the facility are collected and sent to the wastewater treatment system for full treatment. These high-strength stormwater areas include truck parking areas, maintenance areas, and any other areas that could negatively affect stormwater discharges. Areas such as employee parking lots are diverted to drains that allow for the normal discharge of stormwater to the environment. Throughout Sanderson Farms, water conservation practices are emphasized to employees and implemented through service pressure, orifices on spray wands, leaks, and water broom training. Pumps and spray nozzles are also sized specifically for the task at hand to ensure that no water is wasted.

In Fiscal Year 2019, the company reduced their water usage by 40% at their production and processing facilities since 2008.

After treatment, wastewater is returned to the environment through direct discharge to local water bodies or by applying it to land. Fully treated wastewater that is discharged to water bodies is directed down stair steps by gravity, creating turbulence and exposing the treated water to air. This process allows an increase in dissolved oxygen, which ensures that the treated water does not create a zone of low dissolved oxygen when it is discharged to creeks or streams. Processing facilities regularly sample water bodies where the company discharges treated wastewater by pulling an upstream and a downstream sample to ensure that no harm is done to the water body’s environment. Tests run on these samples include TSS, COD, ammonia, total phosphorus, nitrate, and DO. The innovative wastewater treatment process is beneficial to the community, as it supports local streamflow and natural aquatic life found in local water bodies. 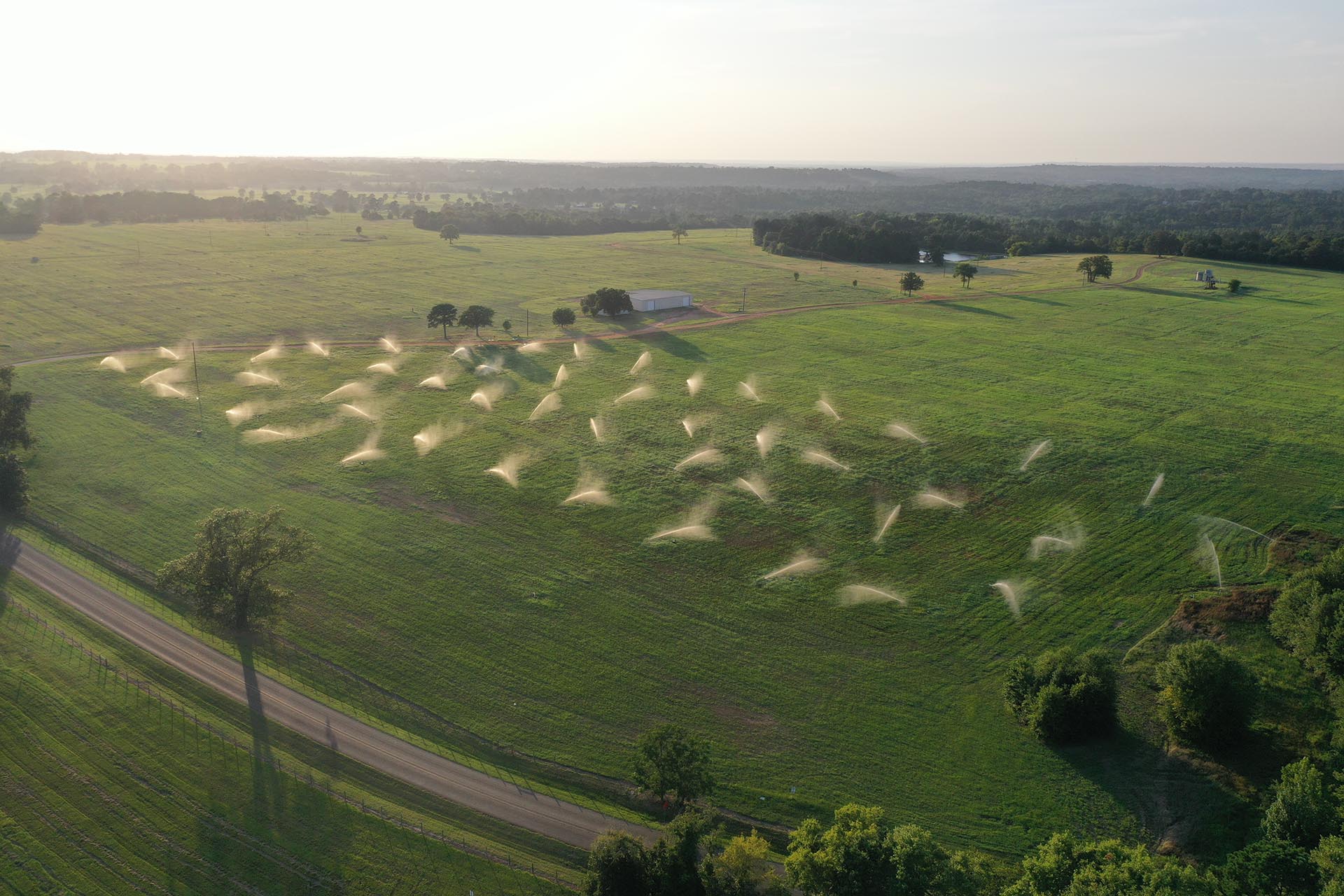 In 2019, Sanderson Farms applied 1,266.2 million gallons of water back to groundwater by land treatment. 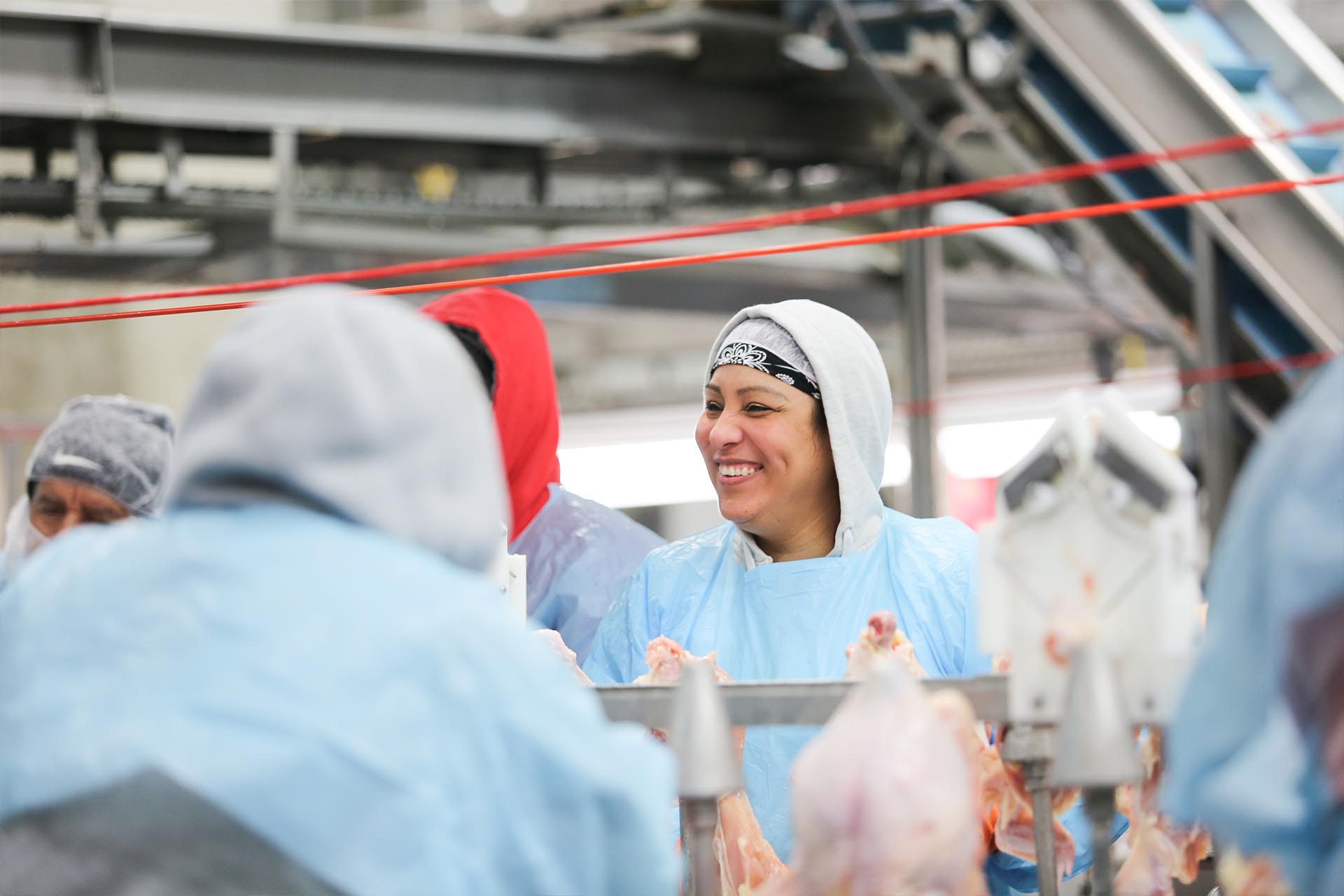 Sanderson Farms believes that today truly is a good day for chicken, as well as tomorrow, and the day after that, which is why they focus so strongly on feeding the growing world with the highest quality poultry products their industry has to offer. According to the United States Department of Agriculture, consumption of chicken, along with other proteins, has significantly increased over the past five years. In fact, chicken consumption in the United States surpassed pork back in 1985 and beef in 1992. By 2050, the world’s population will likely increase by more than 35%, which means food producers like Sanderson Farms will need to feed two billion more people in the world. Sanderson Farms believes that, for a growing population, chicken is one of the most sustainable and affordable protein sources on the market because it is an efficient converter of feed ingredients to meat.

Of the last seven poultry complexes the company has constructed since 1997, four of those facilities have been built in the state of Texas as the state has been an excellent place for their company to do business. When Sanderson Farms built their newest poultry complex in Tyler, Texas, it created over 1,700 new jobs and opportunities for more than 80 family farmers for an estimated $1.43 billion economic impact on the local area over the next 10 years. Sanderson Farms is proud to be a part of generating economic growth and jobs for thousands of Texans for generations to come.

– MCF is an abbreviation derived from the Roman numeral M for one thousand, put together with cubic feet (CF) to measure a quantity of natural gas.

– MMBtu is an acronym for Metric Million British Thermal Unit, and it is a unit traditionally used to measure heat content or energy value. It is widely associated with the measurement of natural gas in energy terms globally

$1.43B in estimated economic impact in Tyler, TX