Texan by Nature is excited to recognize Dallas Fort Worth International Airport (DFW Airport) in the 2020 TxN 20. DFW Airport was also recognized in the 2019 TxN 20 for their efforts in conservation and sustainability that positively impact Texas’ communities, economic prosperity, and natural resources. Read their 2019 write-up.

Dallas Fort Worth International Airport (DFW Airport) is located in the Dallas-Fort Worth metroplex and is the primary international airport in the area. In 2019, DFW Airport was recognized as the Global Airport of the Year by Air Transport World for its innovation in providing a world-class customer experience. Spanning 17,207 acres, it is the second-largest airport in the U.S. by land area, boasting its own zip code and city designation (DFW Airport, TX). DFW Airport connects the North Texas region with nonstop service to over 200 destinations on five continents. For 2019, DFW ranked #10 in the world for passengers and #3 in the world for operations, according to Airports Council International (ACI). Operating over 1,900 daily flights serving approximately 200,000 customers a day, DFW welcomed nearly 73.3 million customers in 2019. DFW plays an instrumental role in the region, historically producing more than $37 billion in annual economic impact and generating an average of 60,000 jobs on the airport each year. DFW Airport is the first airport in North America and the largest in the world to achieve carbon neutral accreditation.

DFW Airport’s conservation ethos entails protection of air, land, and water. Conservation is an integral component of DFW Airport’s approach to sustainable development. Sustainable development is defined by the United Nations (UN) as “development that meets the needs of the present without compromising the ability of future generations to meet their own needs.” As the airport grows and evolves, it faces the challenge of increasing capacity as the population in North Texas, demand for travel, and competition for natural resources all grow. To meet the needs of a vast group of stakeholders and be a good neighbor to North Texas’ communities DFW prioritizes sound sustainability principles as part of their operations and culture. DFW’s sustainability initiatives align with the UN’s Sustainable Development Goals, which are a blueprint for creating more sustainable cities. In 2019, DFW Airport’s initiatives advanced 16 of the 17 UN Sustainable Development Goals, an increase from 15 in 2018.

Data from the US Census Bureau, indicates that 6 of the 10 counties with the largest population gains since 2010 were in Texas, with one of them being Dallas. Dallas-Fort Worth-Arlington, TX had the largest numeric gain since 2010, with an increase of 1,206,599 (19.0%).

As DFW Airport analyzes the impact of its activities on the interconnected ecosystem and communities in which it operates, it is compelled to take action because they believe that sustainability cannot be achieved without a focus on conservation.

The DFW Airport Communications and Marketing team is an essential internal stakeholder in the advancement of its conservation and sustainability efforts. Effective storytelling is key to DFW Airport’s success. By helping employees, customers, and the public understand how their behaviors positively or negatively impact the environment, DFW Airport can gather greater support for its initiatives. The Communications and Marketing team helps tell conservation stories in a compelling way to drive action. DFW Airport’s annual Environmental, Social & Governance report is a great example of their work.

Each year, DFW celebrates Earth Day with outreach events for local schools and airport employees. In 2019, approximately 600 students and 350 employees participated. The event highlighted the airport’s environmental efforts through activity and learning stations. Students also composted their trash, diverting more than 200 pounds of food waste from the landfill. DFW has hosted Earth Day programming for students and employees since 2008.

The National Renewable Energy Laboratory (NREL), a world-renowned research organization, is another valuable partner to DFW Airport. NREL is helping DFW Airport study its complex ecosystem to improve efficiency, resiliency, and sustainability while lowering operating costs. One example of NREL’s involvement is the Athena project. Funded by an award from the U.S. Department of Energy (DOE), Athena aims to improve the efficiency of mobility at transportation hubs. As DFW Airport gains a better understanding of patterns of resource consumption, it can strategically implement new initiatives to further reduce its environmental footprint. DFW is building on an extant partnership with the DOE and NREL to launch a new project, Morpheus. Morpheus will guide the development of a pioneering artificial intelligence system with the capacity to optimize energy consumption dynamically, thus lowering operating costs, risk, and emissions. The project will facilitate the scaling of energy consumption with passenger throughput.

As part of DFW Airport’s Zero Waste Initiative, the airport is working to bring circularity to its operations through responsible sourcing, consumption, and reuse of products — closing the loop on waste. High waste generation volumes in North Texas have stressed local landfills, and DFW Airport wants to do their part to help preserve landfill capacity in the region.

In 2019, DFW diverted 113,694 tons of waste from landfills through its recycling program, waste cooking oil collection program, and construction waste management efforts. Construction waste has been an early focus of DFW Airport’s Zero Waste Initiative. Waste from construction projects, such as concrete debris, is routinely recycled and reused in other Airport projects. For example, the entry drive for DFW’s new Department of Public Safety (DPS) Headquarters was constructed using aggregate generated from crushed slabs from the Runway 17C-35C rehabilitation project, which diverted over 99% of its waste away from landfills. 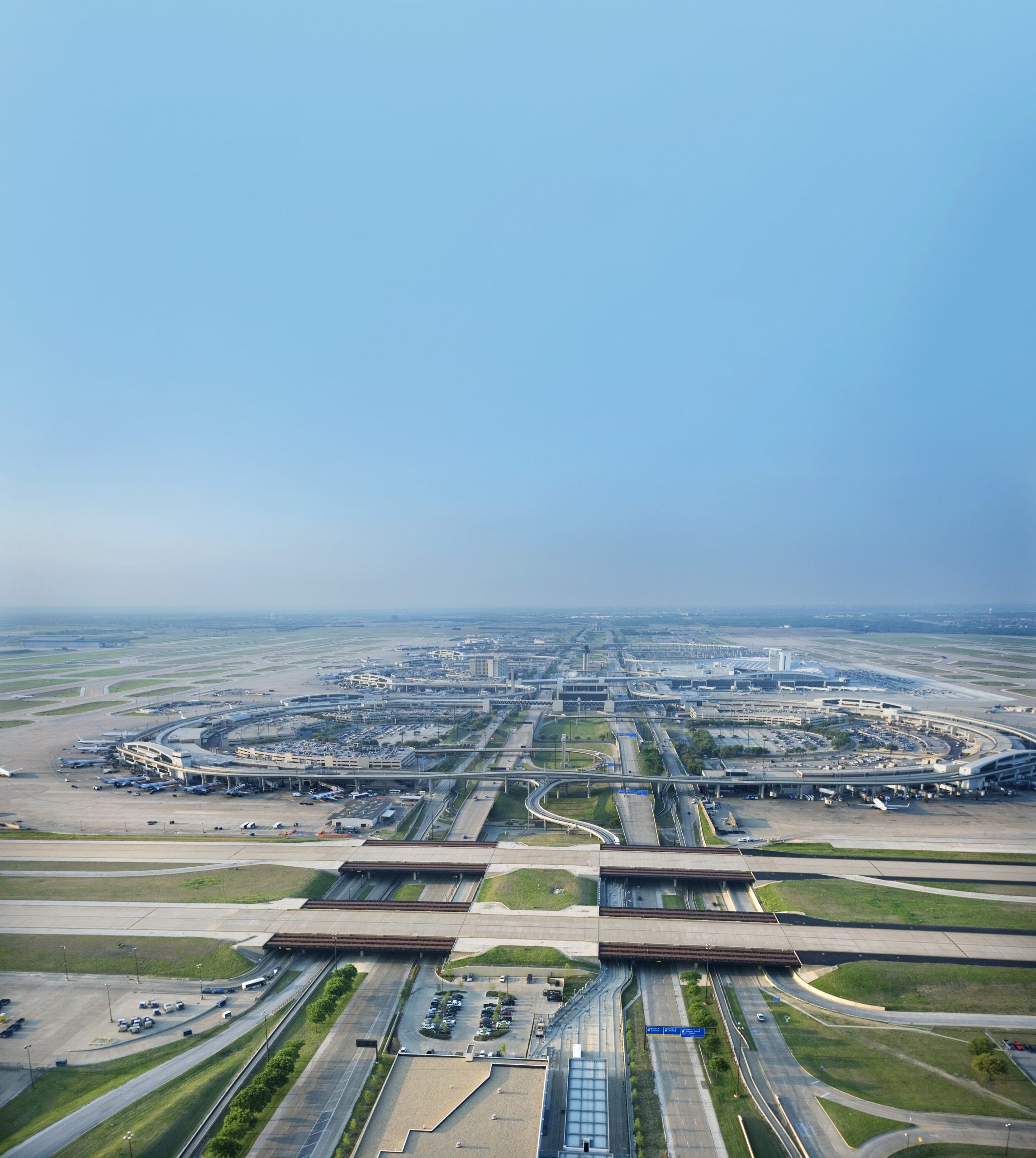 DFW is the first airport in North America and the largest in the world to achieve carbon neutrality. In August, DFW committed to an ambitious goal to achieve Net Zero carbon emissions by 2030, two decades ahead of the Intergovernmental Panel on Climate Change (IPCC) recommendation.

Since 2017, DFW Airport has invested in the procurement of 100% renewable electricity. DFW also uses renewable natural gas (RNG) to power its fleet of nearly 200 buses. Currently, 70% of the natural gas used in vehicles is renewable. Not only is DFW setting an ambitious commitment themselves, they also understand our industry will require strategic partnerships among airports, airlines, aircraft/engine manufacturers, vehicle manufacturers, energy and fuel industry, government agencies, communities to achieve long term climate action goals.

Additionally, DFW Airport is looking to reduce energy use in buildings. As part of its organizational commitment to achieve Net Zero Carbon by 2030, DFW is actively exploring combinations of existing and new technologies to reduce the energy needs of new buildings and building retrofits. For example, the airport’s new DPS Headquarters uses almost 20% less energy per square foot than Airport Headquarters, a LEED Silver facility. This achievement is due in part to the selection of variable refrigerant flow (VRF) technology to condition the building in place of a traditional chilled water system. Additional examples include high-efficiency heating and cooling equipment, dynamic glazing, LED lighting with occupancy controls, and building shading devices, such as trees.

For example, DFW Airport’s energy-efficient LED terminal ramp lighting technology replaced mercury-containing High-Pressure Sodium (HPS) lights, eliminating the need to dispose of hazardous materials and providing superior quality lighting to pilots and ramp workers. Glare shields were also installed to improve night-time visibility for pilots. A control system allows adjustment of light levels based on activity at the gate, improving safety and security for ground crews. The new LED fixtures and control system provide a 75% reduction in energy use compared to the previous HPS fixtures (over 4.4 million kWh of electricity) and save an estimated $250,000 in annual costs. 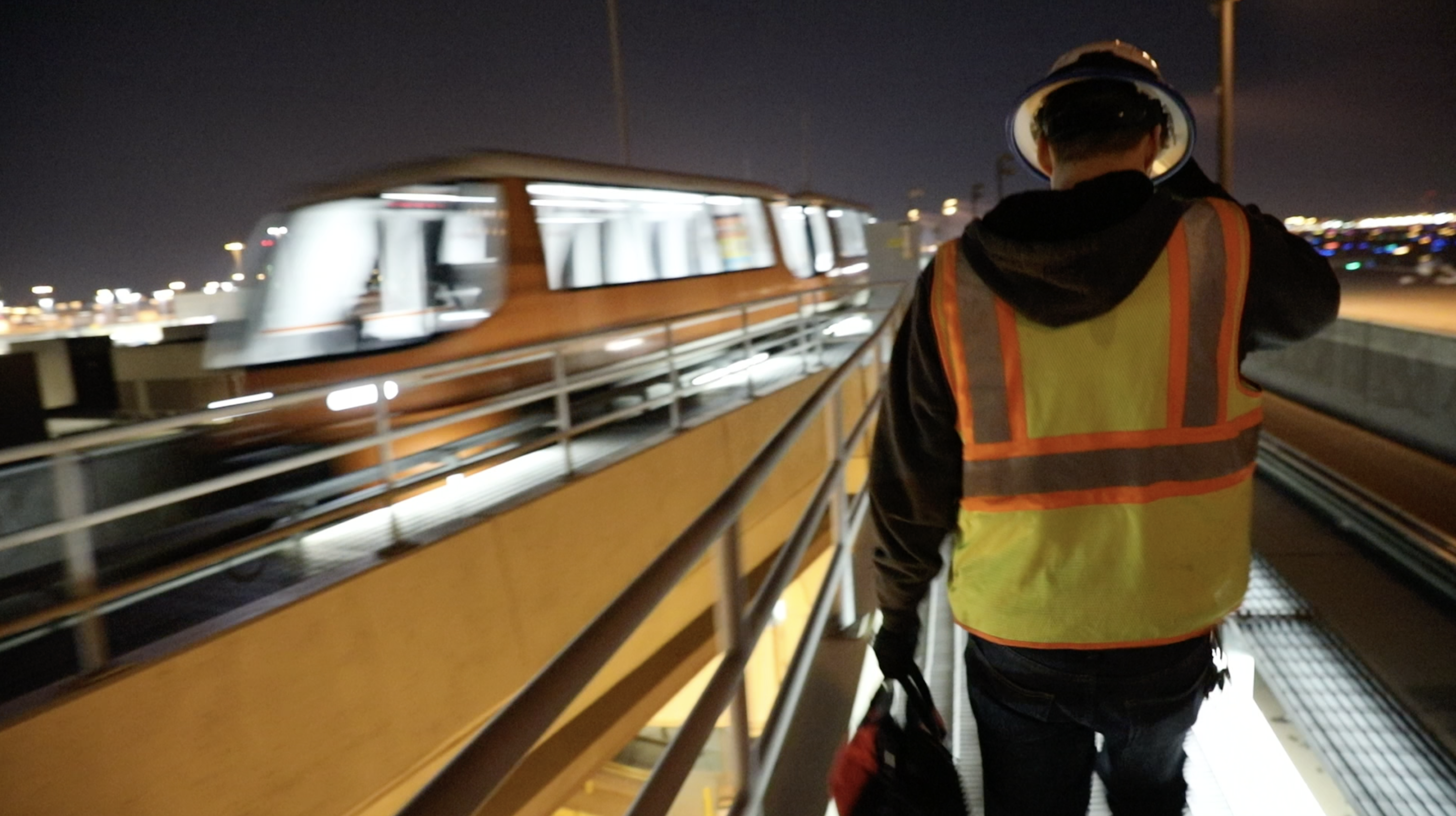 Additionally, DFW Airport completed the installation of nine electric vehicle (EV) charging stations for employee use at Airport Headquarters in 2019. Installations were supported by grants from the TCEQ’s Alternative Fueling Facilities Program. In terminal parking garages, 31 EV charging stations are available to customers. In 2019, over 3,600 transactions were completed at charging stations, providing over 41,000 kWh of electricity to customers – enough to power around four U.S. homes for an entire year.

This year, DFW Airport completed a Construction Stormwater Effectiveness Assessment with the goal of using the condition of receiving waters to inform and drive stormwater program activities. They determined the primary pollutants of concern for construction activities, compiled watershed data, and compared the results against regional and regulatory targets to determine if their current best management practices (BMPs) are effective. Historically, the levels of the pollutants of concern have been well below regulatory limits. As such, the airport developed their own set of metrics and targets based on current regional water quality data, since they do not want to further degrade surface waters. To meet their more stringent targets, DFW Airport is now developing standards for implementation of enhanced BMPs, such as CO2 bubblers and slurry vacuums, at construction sites and scheduling additional inspections during high-risk activities.

In 2019, DFW Airport spent approximately $200K on reclaimed water, which is used to reduce approximately 100 million gallons of potable water per year. 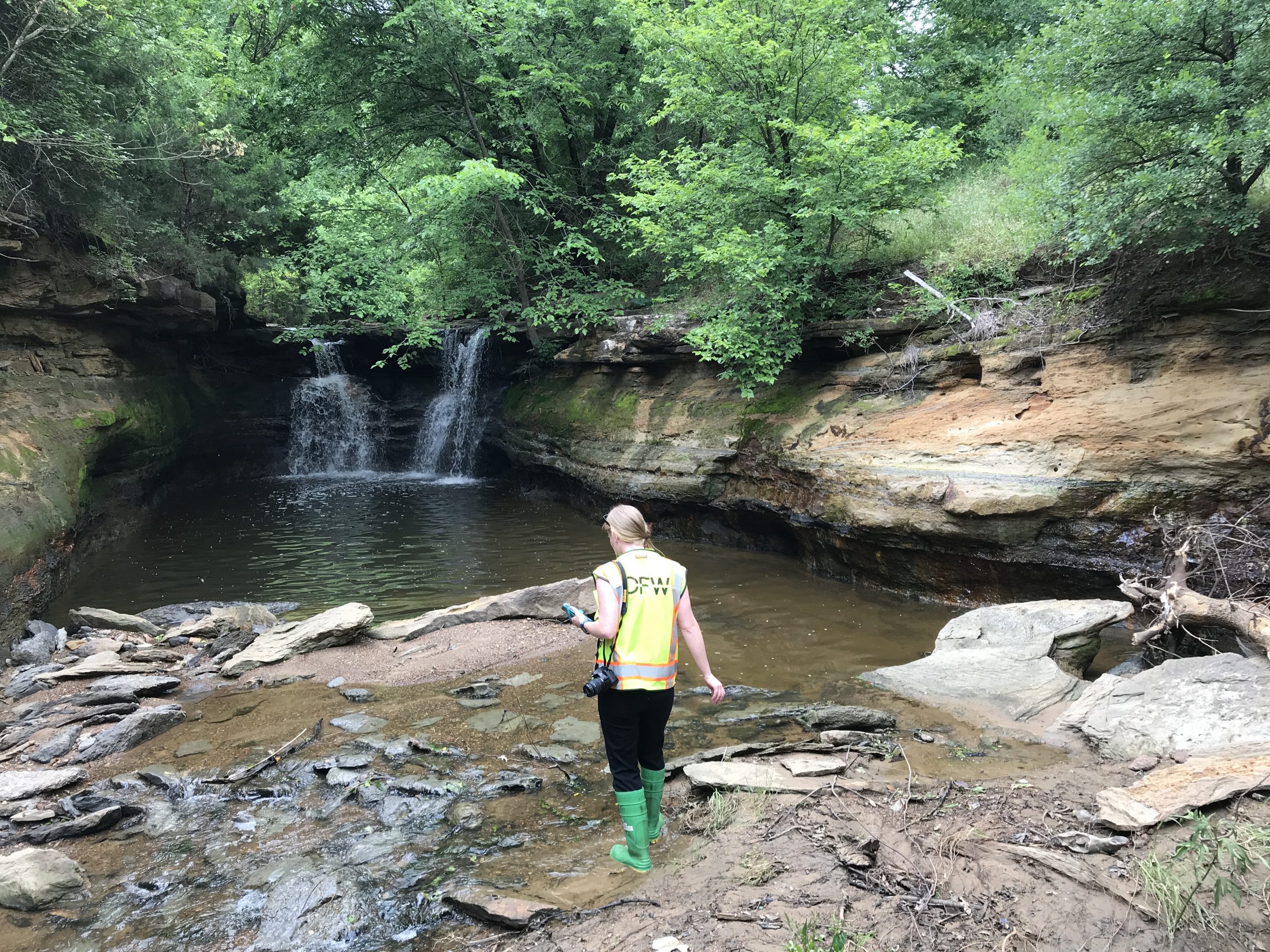 Over 60 species-including birds, coyotes, bobcats, raccoons, possums, armadillos, and numerous reptiles-call DFW Airport home. In 2019, approximately 11,280 birds and other animals were humanely dispersed from the airfield. The airport has a comprehensive wildlife management program that balances aviation safety risks with the protection of wildlife and natural resources. To manage the biodiversity of more than 17,000 acres while protecting aeronautical operations, DFW Airport employs FAA-qualified wildlife biologists and engages its workforce and community partners. Wildlife biologists are responsible for observing and monitoring the airfield and the acres surrounding it and safely dispersing wildlife.

DFW Airport anticipates an increased focus on regeneration and restoration of ecosystem services. Restoration takes a step beyond the basic preservation approach to conservation by placing an emphasis on improving ecosystem function. The value of intact and well-functioning ecosystems provided to is extraordinary, and DFW Airport wants to demonstrate how the pursuit of restoration goals can provide tangible economic value to an organization.

For example, instead of simply preserving existing trees, DFW Airport can strategically identify areas to plant new trees. As they enhance tree cover and biodiversity across the airport, they maximize the benefits provided to DFW and its surrounding communities. Urban trees provide carbon storage and sequestration, reduce and treat stormwater runoff, purify the air, deliver aesthetic value, minimize the urban heat island effect by shading buildings, and are linked to improvements in mental and physical wellbeing. According to the i-Tree tool, developed by the U.S. Forest Service, DFW Airport’s trees are estimated to provide the following ecosystem services and economic value:

DFW Airport believes that when people shift their focus to maintaining and enhancing the services provided by biodiverse ecosystems that we’re compelled to actively improve for the health of the environment instead of solely attempting to avoid negative impacts.

Texas gives DFW Airport a platform from which it can influence the nation and the world. DFWone of the most connected airports in the world, thanks in part to its central location. DFW Airport has a significant impact on corporations and business leaders who choose to headquarter their businesses in North Texas. Texas’ strong economy, combined with the proximity to business partners, has positioned DFW Airport for success in the advancement of its strategic initiatives. The airport’s local leadership—including the mayors of Dallas and Fort Worth, both of whom sit on DFW’s Executive Board of Directors—community, and business partners all champion the airport on a global platform and support its commitment to continue growing responsibly.

In addition, DFW Airport’s strong partnership with American Airlines has been vital. Their recent commitment to DFW as its central hub during the pandemic helped position the airport as the busiest airport in the world in May, June, and July. DFW’s commitment to sustainable and socially responsible business practices remains steadfast. Each year, the Airport looks to raise the bar and set sights on even greater long-standing impacts. The world and the industry are changing rapidly. DFW is also changing. The airport is embracing innovation, improving technologies, and engaging partners to draft our long-term vision.

– kWh or kilowatt-hours is the measure of electrical energy equivalent to the power consumption of 1,000 watts for 1 hour.

– LEED or Leadership in Energy and Environmental Design is the most widely used green building rating system in the world.

~$25.14M in ecosystem services from trees