Cactus Feeders is an Amarillo, Texas-based producer of commercial fed cattle and market hogs. Originally founded as a family company in 1975, Cactus Feeders is 100% employee-owned with its 800+ employees producing over a million fed cattle and 800,000 market hogs annually with gross sales of feed and livestock of approximately $2 billion. The company has cattle feed yards throughout the Texas Panhandle and Southwest Kansas, and pork operations in Iowa, South Carolina, and Georgia. Cactus Feeders is dedicated to finding ways to produce more food, while using fewer resources at a lower cost. 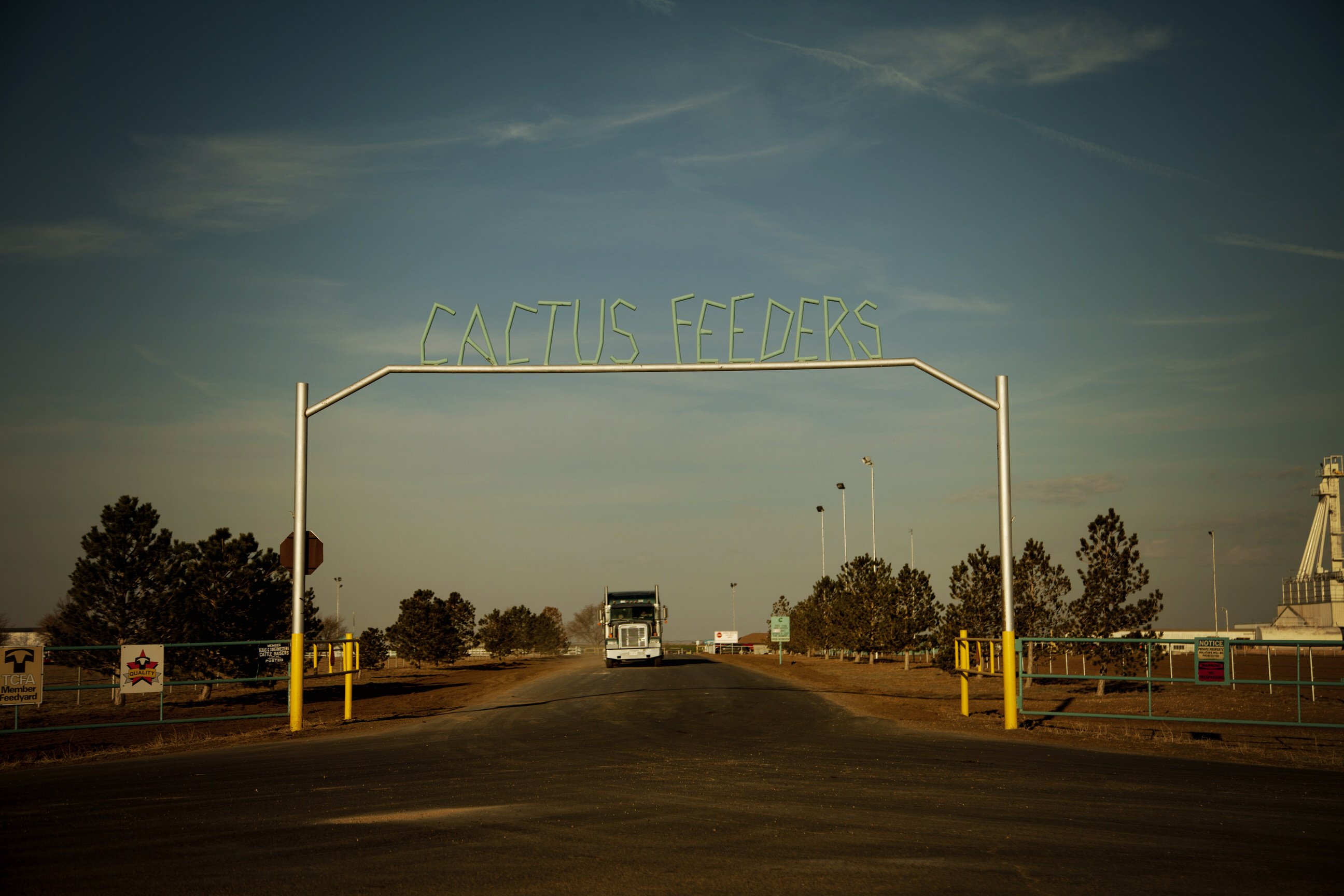 Cactus Feeders believes the survival and progression of their business isn’t just a company forecast or boardroom report: it’s every one of their futures and livelihoods. Their mission is, “Feeding a hungry world; family, friends, and neighbors”, and doing this requires a unique understanding and balance of food production and natural resources. Continuation of their mission and future success rely on the conservation of such vital resources.

The employee-owners of Cactus Feeders are passionate about finding ways to produce more food while using fewer resources, and at a cost that makes it accessible to others. By 2050, the global population will require 70% more food. They will contribute to this demand through extensive research, knowing that most of this increase must come from advancement in food production technologies that improve efficiency and help manage and conserve the natural resources that make food production possible. Cactus Feeders invests in a wide range of conservation and sustainability efforts through their Cactus Research division, ranging from $1 million to $3 million annually.

Today, Cactus Feeders’ beef division produces approximately 50 million meals per week using total life cycle feed resources that are approximately 90% inedible by humans. Both livestock and food production relies on a natural process of interacting cycles. In the carbon cycle, plants, through photosynthesis, take energy supplied by the sun, capturing CO2 out of the atmosphere. These plant products are consumed by animals or humans. Water supports this growth, and nutrients return to the soil for next year’s crop. Touching all of these are people, who are nourished by the output, and contribute their labor and service to production and the Texas communities where they live and serve. At Cactus Feeders, this process provides over 2.6 billion meals per year. They understand that to repeat and grow this amount of food for years to come it will be done through conservation and stewardship.

Cactus Feeders uses a rotational grazing system as a method of increasing soil organic matter in farmland. This system improves soil water holding capacity and reduces the need for irrigation, which decreases their water usage. The project also integrates with their core cattle feeding business, contributing to a steady supply of well-conditioned cattle prepared for feed yards.

Cactus Feeders is utilizing 5,600 acres surrounding two of their feed yards in Moore and Sherman counties in the Texas Panhandle. Previously, this farmland was used to grow corn, but corn in the Texas Panhandle requires 22-27 inches of irrigation per season. While the soil health is good—which is a testament to farming practices and nutrient application regulations—soil organic matter is likely 30-50% of what it was before it was farmed and before the Dust Bowl. 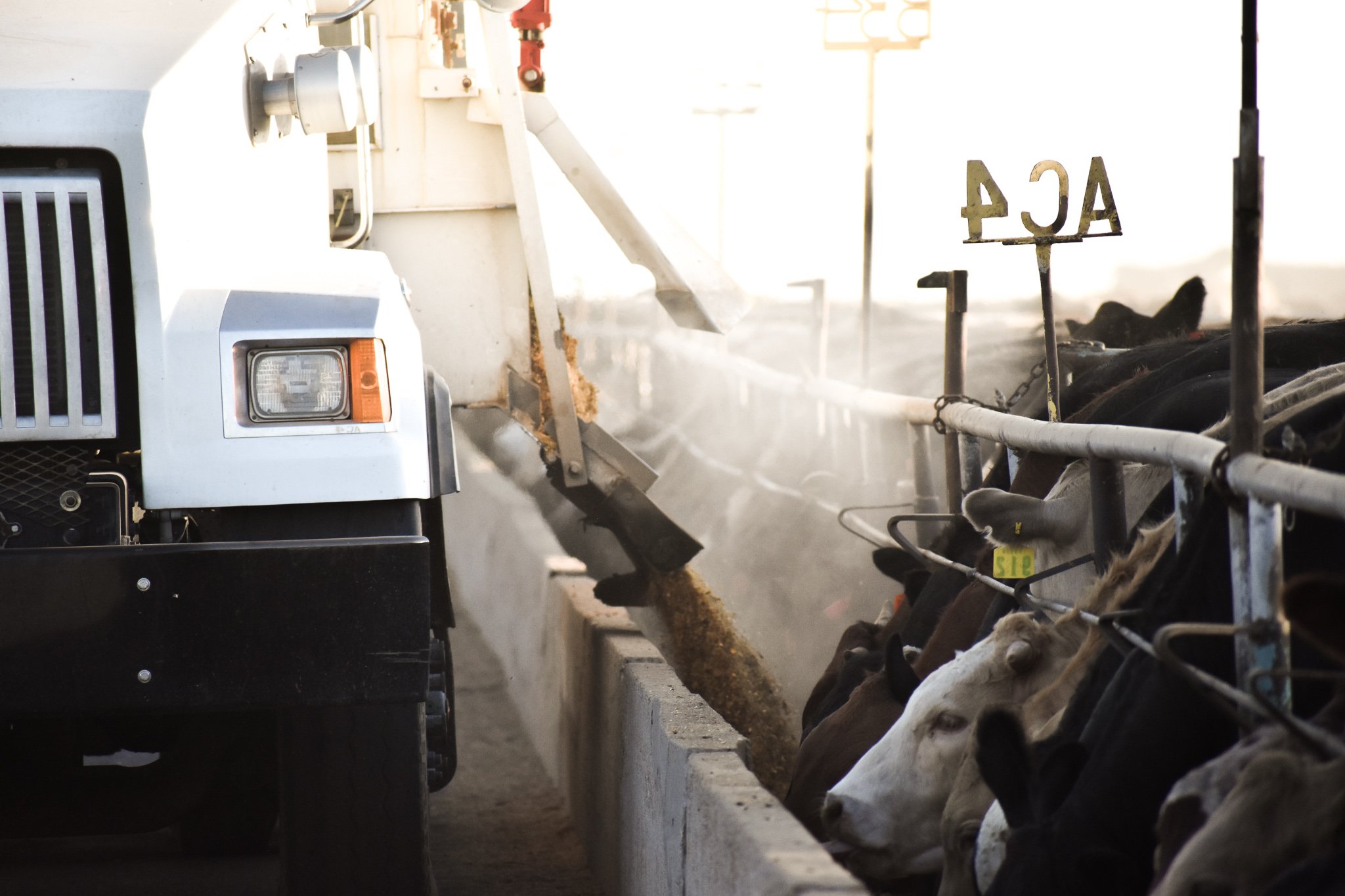 Cactus Feeders has pivotal leaders that shape this sustainability project: Dr. Paul Defoor (Co-CEO), Tres Hess (Beef Division President), Dr. Ben Holland (Director of Research), Pistol Audrain (Cactus Feedyard General Manager), and Tyler Dinkel (Grazing Manager). A vision articulated by Paul and Tres, and inspired by the research and experience of others, led to a project whereby improved grasses and forages could be planted on irrigated acres, supporting the efficient gain of calves that would ultimately enter the feed yards, while also returning carbon to the soil. Operationally, Pistol Audrain and Tyler Dinkel’s stockmanship and desire to positively impact the growth of Cactus Feeders equipped them to build an intensive grazing system from a cotton and corn farm where fences were mostly non-existent.

Cactus Research is a recognized source of innovation in cattle feeding that has benefited not only Cactus Feeders, but the entire industry. Cactus Feeders believes that only through research can they build confidence that their observations are not the result of chance, and that the decisions they make address the three pillars of sustainability (environmental, economic, and societal). 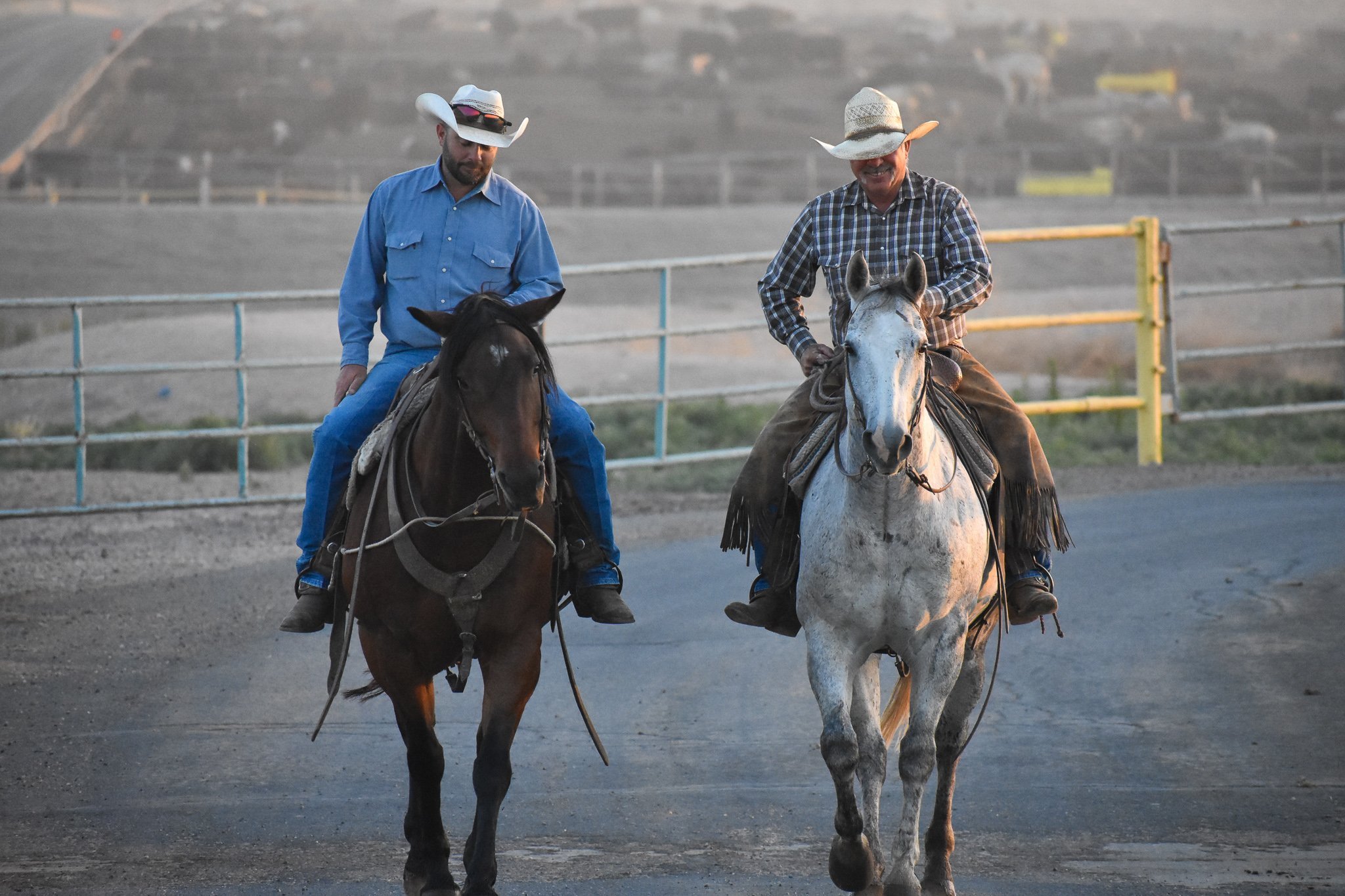 Cactus Feeders has observed overwhelming evidence of change in their region. Although the Texas Panhandle was one of the last places in the U.S. to be settled and developed, the region has seen many changes. From ranching in the late 1800s to the last frontier of farming in the 1910s-1920s, to ecological disaster in the 1930s (the Dust Bowl), change in their environment happened early. Much of what the nation understands about conservation was learned in the Texas Panhandle as a result of the Dust Bowl. Need and action for conservation, technological developments, better farming practices, and the development of irrigation made the area highly productive by the 1950s and 1960s. By this time in our nation’s history, the region was ripe for more innovation in the form of large-scale cattle feeding.

The heritage of Cactus Feeders began at one of the first feed yards in the Panhandle. Since its founding in 1975, Cactus Feeders has led through innovation, adaptation, and development. They have been forward-looking, anticipating challenges to come. Cactus Feeders believes their region is on the verge of more change, with the known challenges of groundwater security in the Panhandle, yet their mission is still to continue to “Feed a Hungry World” well into the future. Through conservation, wise resource use, and improvement, Cactus Feeders knows that they can meet the challenge of providing for the future of not only their Cactus Feeders family, but for the surrounding communities, the state, and the world.

Cactus Feeders chose Texas as home base, because it is integral to their operations and culture. The Texas Panhandle is ideal for cattle and livestock production, because livestock thrives in its high elevation (nearly 4,000 ft), favorable climate (dry and breezy), and abundant feed. The Panhandle is also home to 60% of their employee-owners and respective families. At Cactus Feeders, they know the roots of cattle production run deep in Texas and that Texas’ cattle culture is strong, as is the passion for improving the quality of life of their employees and customers in Texas and the world.

Cactus Feeders believes that further developing the production systems to efficiently produce quality protein from arid and semi-arid lands such as the Texas Panhandle, using little or no groundwater irrigation will be a true value to society, and it begins in the heart of cattle country. With what helped to establish Texas, they will work to keep the state strong, resilient, and productive in the future. 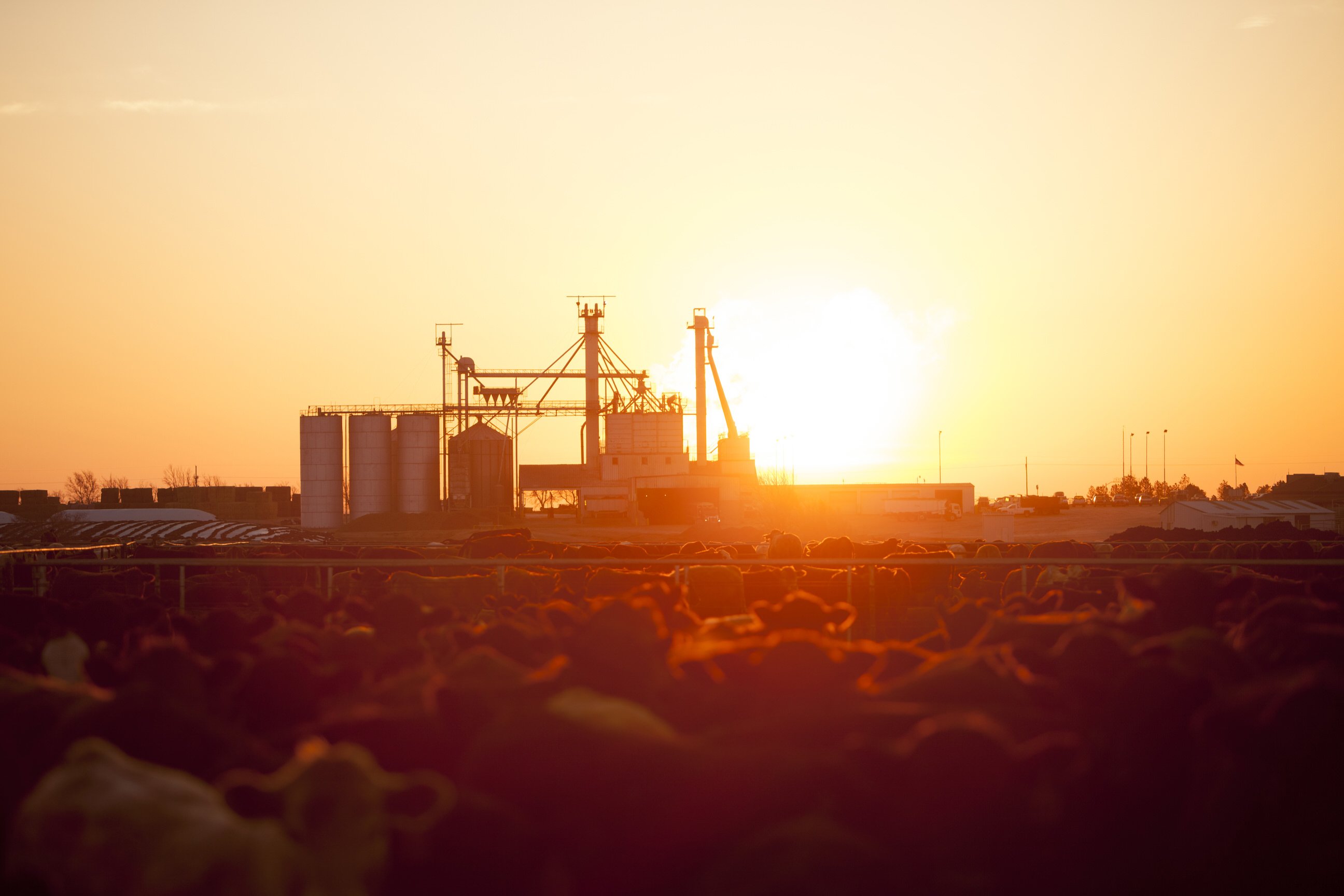